Home » News » Bettye J. Broyles – She Out Dug the Best of Them 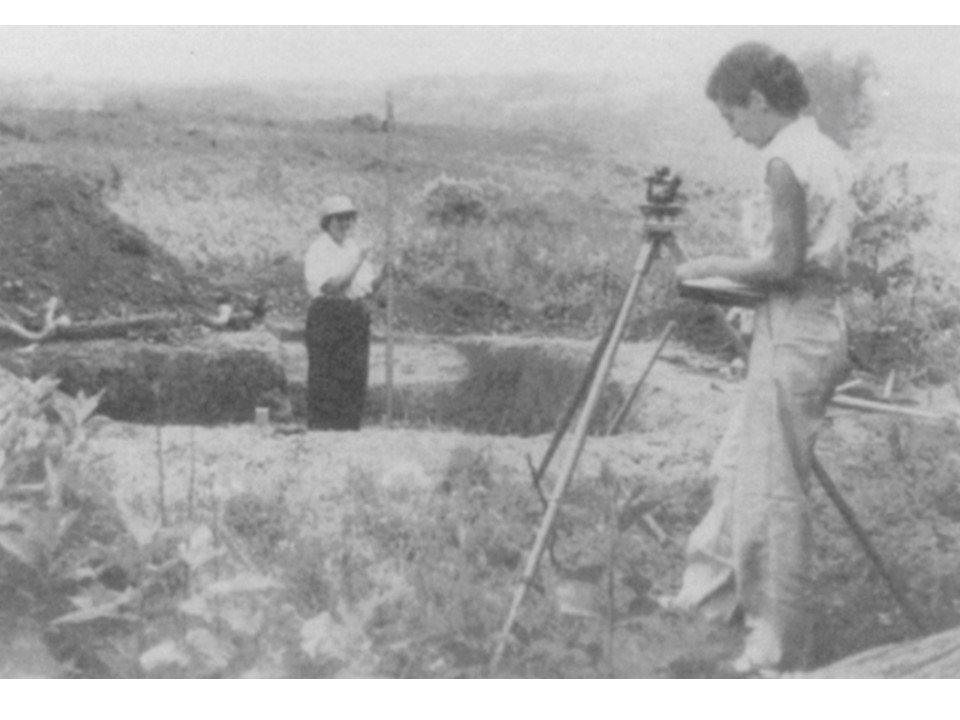 Bettye J. Broyles – She Out Dug the Best of Them

In March, we celebrate the accomplishments of women past and present with National Women’s History Month. In honor of women in archaeology, I highlight the life and work of one of my intellectual great-grandmothers, the late archaeologist Bettye J. Broyles (1928-2011). I first learned about Broyles from my artifact analysis mentor, Dr. Stanley Lantz. As the lab crew sorted stone artifacts, Stanley would tell us tales about his earlier days in the field working with the likes of Dr. Don Drago, Jim Herbstritt, and Broyles. Stanley painted a picture of a sharp, determined, quick-witted, “move over and give me that shovel” kind of archaeologist in Broyles. He never called her by her first name; he only referred to her as Broyles.

Broyles was born in 1928 in Birmingham, Alabama, but she considered Tennessee her home. Her family moved to Tennessee shortly after her birth, and she grew up in a suburb of Chattanooga. Little is known about her childhood years, but as a teenager, Broyles participated in her first archaeological excavation near her home by volunteering with the Tennessee Archaeological Society. In 1947, after graduating from high school, her name began appearing in the society pages of the Chattanooga Daily Times. The newspaper announced Broyles’s marriage to a musician, Raymond Sigfred Jensen (CDT 1947). Their marriage was short-lived, and her following society page announcement noted she was beginning her first year at the University of Chattanooga (UC) in 1950 (CDT 1950).

In 1953, Broyles visited the archaeological sites of Chaco Canyon. Her love of Chaco Canyon inspired her to participate in an all-girls field school the following summer, led by Glenn Black at Angel Mounds in Indiana. During this time, Broyles worked tirelessly to perfect her skill with excavation, survey, mapping, and illustration. Shortly after graduating from UC, Broyles was employed as an archaeologist by the Illinois State Museum (ILSM), where she worked from 1955 to 1959.

Broyles worked as a laboratory and field specialist at ILSM. At the museum, Broyles published her artifact illustrations in site reports (WR 1956) and updated the archaeological survey files to help planning for state and federal highway projects (DC 1957). As a part of this effort, she documented the locations of seventy-two (72) archaeological sites in the field for the Illinois Archaeological Survey (BDA 1957). However, while working at Modoc Rockshelter in Illinois, Broyles experienced some issues related to being a recently divorced, “experienced” woman alone in the field. She found harassment by a male colleague annoying. She moved beyond it by ignoring advances and then happily accepting the most grueling field tasks as retribution for rejecting amorous offers (Kehoe 2022, Claassen 2014: 107). Later, Thorne Deuel, the director of the ILSM, told Broyles that “it was ok for women to be on crews, but not to direct them” (Claassen 2014: 107). Shortly after that, she found a new job in Georgia.

Between 1959 and 1960, Boyles worked for the University of Georgia with Arthur Randolph Kelly. Kelly appointed Boyles to lead an archaeological survey of an entire reservoir, a stark contrast to her experience in Illinois (Claassen 2014: 107). While in Georgia, Broyles used her skill in plane table surveying (a civil survey method used to collect and plot data concurrently) to help map the Kolomoki Mounds Site, one of the earliest and largest mound complexes in the southeast inhabited by Native Americans during the Woodland period from ca. 350 AD to 750 AD (Claassen 2014: 107). During this time, Broyles began work to reconstruct southeastern paddle stamped pottery designs from Swift Creek archaeology sites in the Chattahoochee River drainage. She painstakingly pieced together pottery fragments to recreate whole paddle designs. She rebuilt and cataloged eighty-three (83) designs (Sun et al. 1998).

In 1960, Broyles started her graduate work in archaeology at the University of North Carolina, studying and working with Joffre Coe. After completing her graduate work, she continued to work in the southeast in Georgia, Mississippi, and Alabama. She published an article detailing her work with Swift Creek pottery designs (Smith 2021, SEAC 2011, RCHGS 1991, Broyles 1968).

Broyles began working for the West Virginia Geological and Economic Survey in the Section of Archaeology in 1963. Some of her most compelling work happened here. She started as a field archaeologist and later became Director of the Section. For over a decade (1963-1975), Broyles traveled the counties of West Virginia sampling, excavating, and documenting sites (SEAC 2011, RCHGS 1991). She performed studies at significant sites like Blennerhassett Island and the Buffalo Site, but the pinnacle of Broyles’ work was her investigations of the St. Albans Site between 1964 and 1968 (Broyles 1971).

St. Albans is a deeply stratified (i.e., separate soil layers containing artifacts where the oldest deposits are deeper than the younger deposits) Archaic period (8000 to 2000 BCE) site along the Kanawha River. During the Archaic period, hunter-gatherer Native American groups operated out of short-term camps and moved regularly to follow prey and collect resources. Broyles identified evidence of their camps at St. Albans.

Broyles spent four field seasons at the St. Albans Site. Her excavations identified cultural deposits in forty-one (41) distinct layers extending to a depth of 18-feet below the modern surface and dating to 7900 BCE. The cultural deposits contained various artifacts and features, including projectile points and fire pits with charcoal. Because of the well-defined soil deposits and charcoal for radiocarbon dating, Broyles documented one of the finest and most definitive projectile point sequences in eastern North America. Researchers use this point sequence to establish dates at other sites, and it is frequently cited by people studying the Archaic period here in the eastern United States. In 1971, Broyles published the results of her investigations from St. Albans in West Virginia Archaeologist (Broyles 1971). Broyles nominated the St. Albans Site for listing in the National Register of Historic Places (NRHP), and the National Park Service listed the site in 1974.

On a side note, just over a year after moving to West Virginia, Broyles met and married Herbert Hyre, a native West Virginian. She then designed their new home in Morgantown and built most of their furniture for the house, among other things (TRH 2010).

Before retiring, Broyles worked for the University of Mississippi from 1977 to 1982. She retired in 1982 after her 30-year career in archaeology. She moved back to Tennessee and began genealogical research on her family. Her interest in genealogy became her new passion for the next decade. Boyles researched, compiled, and published multiple books on Rhea and Meigs Counties. Members of the Rhea County and Historical and Genealogical Society elected her President of the Society in 1986. Then, her peers appointed her as Rhea County Historian the following year. Broyles remained active in her interests and community until she died in 2011 (RCHGS 1991).

Broyles’ contributions to eastern woodland archaeology are profound. Broyles’ career flourished in a male dominated profession at a time when it was barely tolerable for women to work on field crews, let alone lead archaeological investigations or direct agency departments. Broyles once said, “No one bothered to tell me that this was a man’s job. I have always been a rebel, and it was something I wanted to do, so I did it” (THN 2010). Her work has influenced almost everyone who has done archaeology in the eastern United States, and researchers continue to build from her efforts. The depth of her contribution to archaeology still resonates today.